Why so Much Math?

The camp started off with the campers getting to know each other. Since these camper are younger that our morning camp the ice breaking went very quickly and we found ourselves right into some of the technical info regarding robots and programing in general.

Chad id a great job of introducing the concept of binary numbers.  As he got into this one camper asked, “why does one question about controlling robots lead to 30 minutes of math?”  Great question which lead to even more talk about how math the essential tool of tech.

We then had a chance to get to know Romo.  At first they could only sort of cash him around but they quickly learned how to play with him.

Here’s a link to some video of that process.

Meanwhile “Team Romo” decided he needed a race track and promptly began making it one. 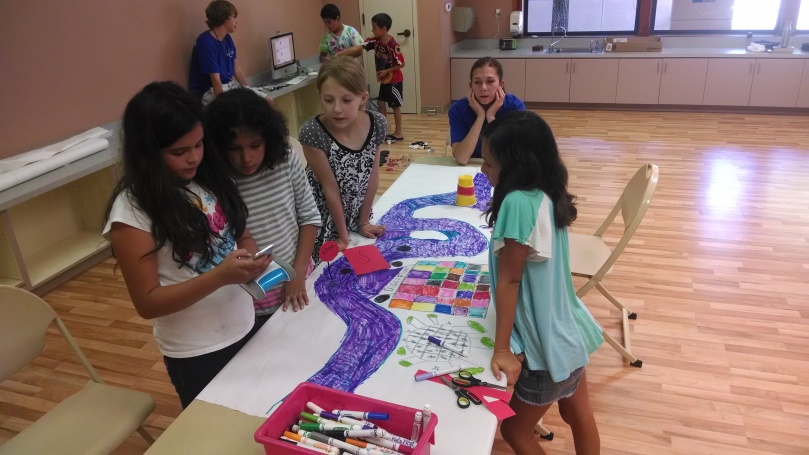 By the next day the disco floor became a much larger.  Here’s a video of the camp in action.

And here is a video of some of the campers first encounter with Romo. 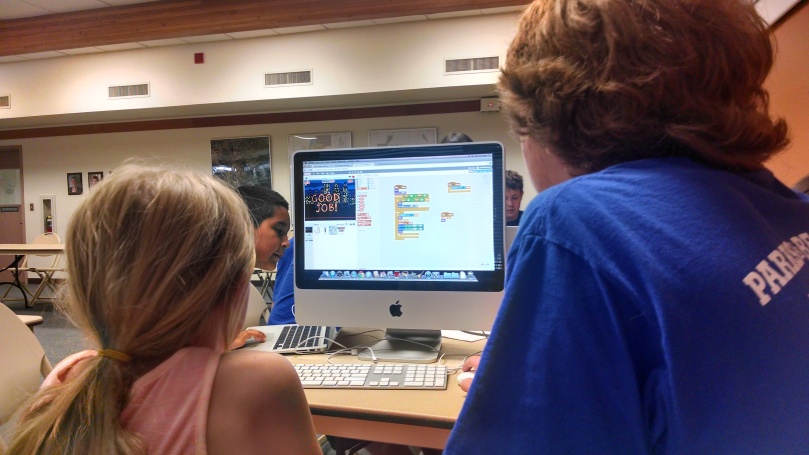 Well, we didn’t exactly decide not to do the tour but the campers were clearly loosing interest. Part of this is that they pretty much learned all the tech behind QR Codes and WordPress so they wanted more challenge. Chad suggested that we introduce them to Scratch, the graphical programing language.  This was an mediate hit.

Over the course of two days, with Chad’s help, she created a wonderful game called: The Ghost the ate the Allis’ and Unicorns.  Here’s a link to a video of her demo.

Levi recreated the classic game Pong and is not figuring out how to make it even more challenging.

Matt blew right by Scratch and working with Christian went directly to learning Objective C.  Time will tell what this leads to.

Cole has become our videographer and has created a great “trailer” for the camp.  This will soon be posted to the Healdsburg Rec website and I’ll add the link went it is up. 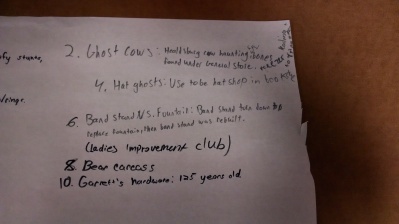 The campers made a map of the plaza and then determined QR Tag sites that they campers are most interested in developing.  As they did this a theme began to emerge: Ghost of the Plaza.  Some of these are actual ghost and some are things hat used to be here and are now gone. The sites are:

The campers created pages for each of these and populated about half of them with content for the first page. The next steps will be to finish the 1s pages and then visit with Holly at the Museum to get “The Rest of The Story”.

If you design and market a Tech-Play camp guess what kind of kids you get?  Very bright, shy and awkward. Our camp leaders; Chad, Christian and Coral did a great job of breaking the ice and getting the kids a lot more comfortable being with each other and interacting with the other campers.

Progress Report to The Recreation Director

Sonja,
Thank you for assisting our team this morning in their contacts with the merchants around the Plaza.  While I expected a positive response from the businesses the results were even better than I’d hoped.
Our meeting with Holly Hood at the Museum was incredible. Holly mesmerized us with her stories about Healdsburg.  She helped us understand that historical research is very different from and a lot more interesting than a google search.
We were particularly pleased to learn that the next exhibit of the Museum with be the History of the Plaza.  That suggested to us that we should narrow the focus of the camp to the historical stories of the plaza with the thought of leaving the QR Tags in place for at least the duration of the next exhibit and perhaps longer. The system for generating the codes allows us to change their content dynamically from our computers so, if needed, later we can adapt the content of the tour’s tags to to mesh with the exhibit.
As I originally conceived this Camp I thought we should offer many options for the campers. Today it became clear that the campers will have a better experience and a better product if we narrow the scope somewhat, i.e. not do games, only stories. What we will suggest Monday when the camp starts is that each of the three teams will get one block as their subject – Plaza, Center and Matheson. This will give each team 6 to 8 buildings around which they can build their stories. During this next week we will work with the campers to come up with a unified story structure, i.e. Then and Now, After the Quake, Ghosts and Amazing events, etc.
The challenge now may be transportation and scheduling. Holly is willing to allow the campers access to the collection before the Museum opens which will really help give the campers the time they will need. I think we can also have a lot of work done back at Foss Creek on our computers so some camper will be there and some can be at the museum which will reduce our impact on the research space. However, that will still mean we have to move the Campers around some.
Grace provided us with excellent team building exercises. While we expressed our gratitude it would be terrific if you also let her know how much we appreciated her skills and knowledge.
All in all, an EXCELLENT day,
Jay

Our first project was to create a treasure hunt around the Foss Creek Recreation Center.  The course has 8 stations.  Each station has three clues.  Creating this course required, in addition to game design and content creation, that the campers learn how to generate QR Codes which they found to be fairly easy.  The more difficult challenge was learning WordPress as that is the platform we used to host the hunt. All of the campers mastered both of these challenges.  Some became very proficient in less than two hours!

Changes to the Plan

The first and most disappointing finding was that Bluetooth Low Energy Beacons (iBeacons) are not ready for prime time. There is poor integration between the beacons of various vendors of software and hardware. The software tools available (SDK) are crude and difficult to use. Support comes mainly from iOS vendors and that leaves out most end users.  So no beacon based games. We will use QR Codes instead.

While augmented reality is cool that too is several years away from being an element in the design of games unless you have major programing chops.  The few apps available by commercial vendors seem to be pretty good by not appropriate for early learners.

The Primo programing tool/toy is very cool but unfortunately wasn’t available in time for the camp. Ditto Bo and Yana, WowWee MiP and Moss Robotics.  The good news is that Romo is a real hit and Mindstorms EV3 is very cool.  More on these in the next post. 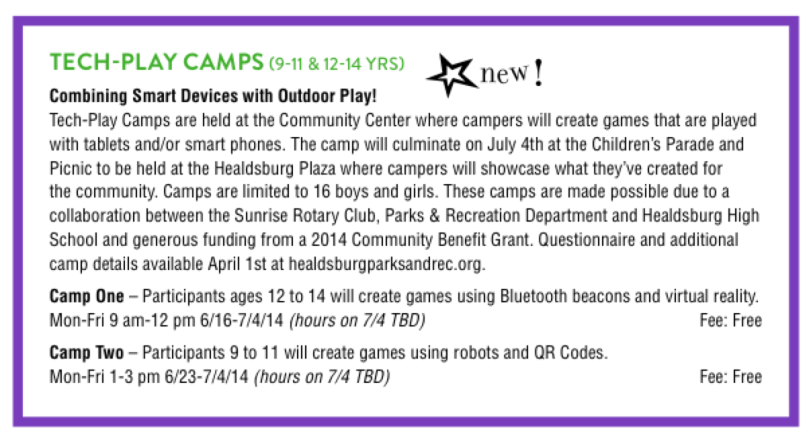 This program is a collaboration between the City of Healdsburg, Parks & Recreation, Healdsburg High School Technology Integration, Healdsburg Museum & Historical Society, and the Healdsburg Rotary Sunrise Club. Each of these groups is excited about engaging our youth in practical and fun uses of technology.

One of the main outcomes for this program is for campers to learn to program apps so that they can use smart devices as tools rather than just for entertainment and communication.  We expect some campers to be very tech knowledgeable and others less so and the program content will then be adjusted to accommodate these various skill levels.  Campers will be provided a variety of programmable devices, as well as have the support of instructors and camp leaders available to engage everyone from beginner to advanced techie.

Camp One will create two “games”.  In addition to the portable devices provided, Bluetooth beacons will be available that will activate the app the campers create or a smartphone that has the camper’s app installed.  This activation will bring up a screen that is specific to each location where the beacon has been placed.  In addition to learning the game app, the campers will also create the content for each beacon that will be located in buildings around and within one block of the Plaza.

Two games will be created; a treasure hunt and a historical mystery. In the historical mystery game the beacons will display a photograph of the location as it appeared in earlier times. The overlaying of virtual information is known as Augmented Reality and is the newest trend in game design as well as travelogue apps. It is hoped that the beacons will remain in place for a year or more so that the games can continue to be played and used to entertain guests coming to Healdsburg.

The technology of Camp Two is less technical will appeal to campers with no prior tech knowledge.  One game resource will be programmable robots such as Primo,

PowerUp RC Paper Airplanes, Quadcopters and Bo & Yana.  The second element is QR Codes.  The challenge for the campers will be to understand these systems well enough to be able to create a game that uses both technologies.

4th of July Show and Tell

The event on the 4th will be in conjunction with the Recreation Department’s booth at the Sunrise Rotary 4th of July event. The current concept is that campers will be present to share their games.  Ideally campers will form small teams that include residents and visitors and then go off on adventures.  Security for the campers will be assured since the field of play will be generally visible from the booth.  The field of play may be expanded if it is determined that are adult chaperons for the campers or we can monitor them electronically.

In addition to the treasure hunt game we also engage the campers in creating a mystery game set at the turn of the 19th Century around the Healdsburg Plaza. The Museum has recently completed digitizing their complete photographic collection and will make this available to campers. The Museum in very interested in this project as they are in the process of exploring retiring their current audio tour system and using smart device apps.

Well in advance of the camps shop owners around the Plaza will be contacted and fully informed about the content of the Tech-Play Camps and their participation options explained.  One of the goals of this project is to educate merchants about the newly emerging beacon technology of location-based marketing and its uses in creating positive and mutually beneficial relationships with customers. If the event and the experiences of the merchants are positive, with their permission, the beacons could remain in place and become the backbone of such a system.