The following is an email discussion between Penny Wilson, one of the premiere Playworkers in England and me. You can follow her playkx@play.is.my.work

Jay – Have you ever wondered that, while it seems many people think adventure playgrounds are great, there are so few of them? I suspect this has a lot to do not doing a deep dive into what works and what stands in the way of broader acceptance. Let’s try to see if we can tease out some of the issues.

Penny – There is always an underestimation of the cost of a sustained project. It demands a huge amount of adult work and constant fundraising to run an Adventure Playground to the demanding standards, regulations, innovation, and support for the staff team.  The difficulty with getting suitable land to rent and build something so extraordinary upon in just the right location is a real headache. And when you have done all of that, there are very few hours that the playground can actually be open to children.

Jay – Perhaps we can start by looking at the term “playground.” The vast majority of the public has a very different idea about what a playground is and should look like. Had these projects been called “urban adventure camps,” I think there would have been more acceptance of the idea. The notion of a campfire even begins to make sense. Another issue is that playgrounds don’t require staffing while camps do. Positioning these as a recreation program rather than a public park playground may have made the whole idea more palatable.

Penny – I think that language has changed so much since Lady Allen coined the term Adventure Playground.  At that time it was a fresh new idea.  ‘Recreation Grounds’  and municiple playgrounds were dull and lifeless places. This concept fizzed and bubbled with inspiration.  We need to remember that most households used fire, that there were many bomb sites and that children were allowed a huge amount of freedom in postwar years and right up to the 1970s. Of course, it’s also worth pointing out that language carries different weight and meaning on either side of the pond.

Jay – What is it that we are trying to provide children when we promote adventure playgrounds? I contend that their real value is loose-part play. If this is at least one to the major benefits, then is the current format the only way to do this?

Penny – for me the most powerful thing about Adventure Playgrounds is the community in which the site and the community of children (and Playworkers) which grows in them.  They always were and still should be a neutral space within a neighbourhood, aware of its needs and talents and playing a role within them.

Jay -One thing is clear; most adventure playgrounds are not suitable for younger children. This is too bad, since children of all ages benefit from loose-parts, even the youngest, as this great article from Community Playthings points out.

Penny-  we always used to have the broadest possible age range of children attending Adventure Playgrounds. It was only ill-informed inspection and regulation which put an end to that. Since that time in the UK, children have been segregated into quite tiny age groupings. (There is seldom any inclusion of children of any age with disabilities within play settings now.) Bob Hughes introduces us to the notion that children treat an adventure playground as they do the natural world which it mimics. He points out that little children find adventures to suit their size and abilities, gradually building up to more demanding risk and challenge that suits their age.  He calls this Graduated Access.  Playworkers also feel that play is catered for in very early years and that older children’s play needs tend to get sidelined by educational and other agendas. We would argue that it is still of vital importance for older children to play.

Jay – Another term I’ve always had a problem with “junk” playgrounds.

Penny – I guess junk makes sense if you are worried about the theft of materials.  The term “junk playgrounds” was very much of its time and in relation to the rich history of the brilliant idea.  Reclaiming junk was a brilliant twist on mass destruction and multiple deaths in one’s neighbourhood. Here is a crux of the subject. It was a community initiative.

Jay – But giving kids junk instead of well-designed construction systems is to my mind unprofessional and demeaning. The notion of giving things that they can manipulate to their own ends is amazing. Letting them do the creating is unique in current childhood experience. To my mind, it is the quality of the support that is offered them is where the quality is. OK, so kids get a chance to use hammers and nails which I suppose is worthwhile.

Penny – I am not sure that I agree. It is great to find children creating a purpose and meaning for objects that they find around them. Their lives are so filled with adult manufactured objects that this is one way of handing back the inspiration and creativity to them. Hammers and nails are interesting and fun. However, adventure play seems to me to be about a great deal more than physical challenge and construction. It is about discovering the world and the fascinations it unfolds within the playing child.  For some of us, this world is one that is filled with dressing up, or acting, with digging, den building,  making daisy chains, standing on your head or quietly watching and daydreaming. We should be very careful not to mistake gross motor skills for play. They are only one tiny little part of the panoply of what playing is. The Gasamstkunstwerk, (total artwork) of play is a mash-up or life without boundaries of interest. That is what an ideal Adventure Playground has to offer. In this current financial climate, it is our responsibility as play literate adults to be finding as many ways as possible for as many children as possible to have as much access as possible to free play experiences over which they have control. 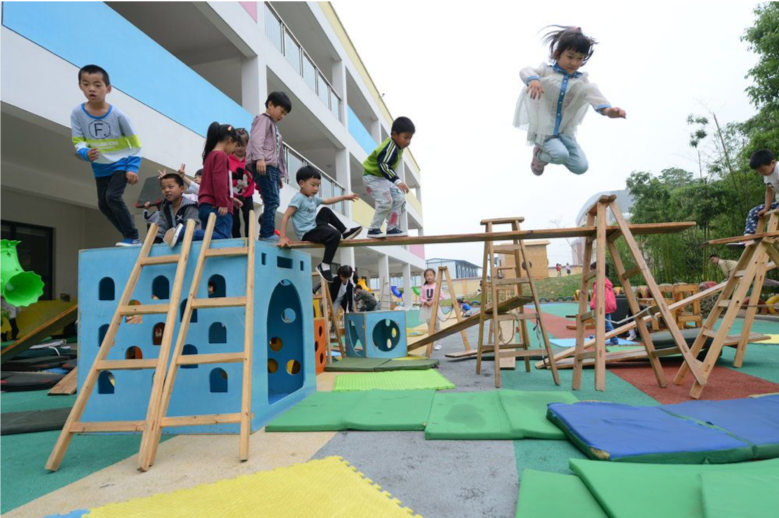 Jay – A better approach to my mind is what we see at AnjiPlay in China, where the whole curriculum is based on loose-part play. Yes, these are fenced in school environments, and the apparatus is put away each day. But look at the level of challenge presented, extraordinary. In this picture, what first catches one’s eye is the leaping girl, but if you look at the ladder behind her, you can see that it is tipping over, likely because she has pushed off from the plank which supported it. One wonders what will happen next. Will the whole assembly tip over, spilling her playmates to the ground or will they react in time to right the ship? What I don’t anticipate is that anyone will be hurt as these kids know exactly what they are doing and how to react. They have essentially built their own Parkour. And they built that today and tomorrow they will build something entirely different.

Penny – The issue is that adventure playgrounds are not about equipment, they are about the community of players and their families. This community involves, in fact, depends upon the playworkers. Pogo Park is a great example. I ran an inclusive adventure playground all based on loose parts and playworkers. That is what I am doing now essentially. The project creates a community around play. (Hence my request that you look at loose parts rather than depending on a kit!)

Jay – While I have dedicated the bulk of my career to public playgrounds with fixed apparatus, I now believe that loose-part play in combination with trained supervision is what is best for children on a daily basis. Agreed AnjiPlay, Blue Blocks, Snug, and Rigamajig are the pioneers in this field, and there is so much more yet to be discovered, especially as we look at what will work for even younger children.

Penny – My point is that it works just as well with no cost low-cost stuff and people.

Jay – Oh, and let’s come up with a better name?

Penny – That is an age-old argument… Lady Allen’s memoirs struggle with it.  Community playspace works